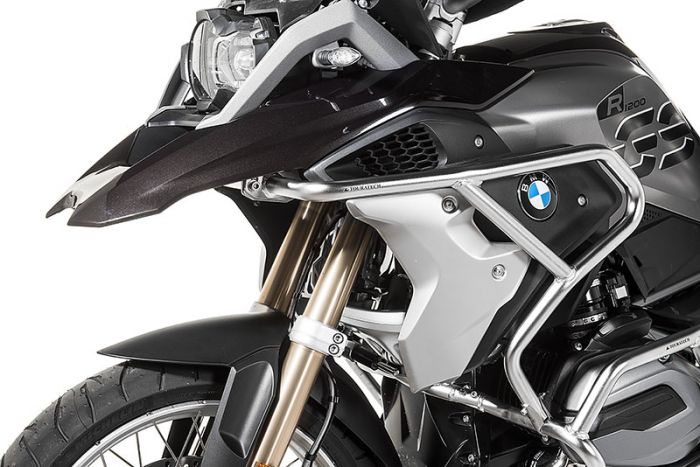 Skip to the beginning of the images gallery
Details
The Touratech crash bar extension protects the delicate radiator, the fairing and even the tank of the new water boxer!
Even though BMW has fitted the radiator as closely as possible to the R1200GS , its bottom corners still protrude quite a lot. A bad drop can be all it takes to put paid to a trip - and you can expect a large bill for repairs.
The Touratech crash bar extension will put an end to annoying scratches on the fairing!
Made exclusively of strong, electropolished stainless steel, the extension will not rust. Even deep scratches are less frightening, and can simply be ground off.

Despite the impressive tube diameter, the crash bar is positioned as closely as possible and symmetrically to the vehicle axis. It has practically no effect on the lean angles or ground clearance. The crash bar extension looks as if it were a part of the motorbike.


- forces triggered by a crash or the motorbike falling over are absorbed and diverted to the specially intended points without causing any major damage
- the generously dimensioned cross-sections protect the rider and motorbike even in a head-on collision
- stable, multi-position attachment with high-tensile clamping to the engine crash bar and bolting at the front
- lends the R1200GS an aura of Adventure
- can only be fitted in conjunction with our crash bar and the original BMW crash bars
- for all BMW R1200GS models from 2017

The crash bar not only enhances the appearance of your R1200GS, but is also a sensible investment to protect it against expensive damage. Perfectly complements the Touratech engine crash bar!